The One-Step was a ballroom dance popular in social dancing at the beginning of the 20th century.

Troy Kinney writes that One-Step originated from the Turkey Trot dance, with all mannerisms of the latter removed, so that "of the original 'trot' nothing remains but the basic step".[1]

The One-Step included the following basic figures (and a number of more advanced ones):[1]

Step by Step is an American television sitcom that aired for seven seasons. It ran on ABC as part of its TGIF Friday night lineup from September 20, 1991 to August 15, 1997, then moved to CBS, where it aired from September 19, 1997 to June 26, 1998. Patrick Duffy and Suzanne Somers star as single parents Frank and Carol, each with three children, who wed and form a blended family.

Frank and Carol marry while vacationing in Jamaica after a whirlwind courtship and Frank plans an identical vacation to “accidentally” run into Carol. They planned to keep their marriage a secret, but Frank accidentally reveals to J.T., they are married during a barbecue he and Carol hold to introduce all the children, leaving them surprised and angry at first.

Each episode depicts typical situations for a new blended family. Family members’ differences cause arguments and resentments, but over time they grow to tolerate and become loyal to one another. 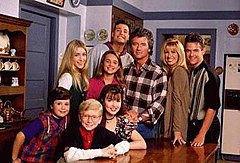 The series was created and executive produced by William Bickley and Michael Warren, and developed and executive produced by Thomas L. Miller and Robert L. Boyett.[2] It was produced by Bickley-Warren Productions, Miller-Boyett Productions and Lorimar Television (the latter doing so from 1991 to 1993, when Warner Bros. Television assumed production responsibilities for it and Lorimar's other television series after shared corporate parent Time Warner consolidated the two production companies). The casting of Patrick Duffy fulfilled a contractual obligation that Lorimar made to give him a new show after his previous series, Dallas (which was also produced by Lorimar), had ended its run. It was created off of the idea of combining two of the most popular television stars from the 1970s known for their good looks (Duffy and Somers) to star as parents to attract adult viewers, with current teen celebrities (Staci Keanan from My Two Dads and Going Places, Brandon Call from Baywatch and Sasha Mitchell from Dallas) to star as their children to attract children and teen viewers.

Staci Keanan and Christopher Castile had previously appeared on the Miller-Boyett-produced ABC sitcom Going Places, which debuted the season prior to Step By Step, playing characters with no familial relation (Keanan – who played Lindsay Bowen, the teenage neighbor of the show's adult characters – as a series regular, Castile as a recurring character). Keanan was the first of the two Going Places stars to be cast on Step By Step in the spring of 1991. Castile, who had played gawky child Sam Roberts on Going Places, brought the same character traits to the Mark Foster role, which was speculated to be Miller-Boyett's continued attempt to give the Family Matters character Steve Urkel a white counterpart. In a similar instance of hiring actors over from their other TV series, the producers also cast Josh Byrne as Brendan Lambert on Step By Step, after he had just finished a supporting role as Patrick Kozak on Miller-Boyett's single-season CBS sitcom The Family Man.

When the series was casting its characters, child actor Jarrett Lennon originally landed the role of Mark Foster. Lennon had been chosen by the producers after guest starring in the last original episode of the Miller-Boyett series The Hogan Family, which was produced in late 1990. After shooting the original (unaired) pilot for Step By Step, Lennon was dismissed from the role of Mark, and the producers later replaced him with Castile (who had blonde hair like on-screen mother Somers, as opposed to Lennon having brown hair). Most of Lennon's pilot scenes were reshot with Castile, but during the first season, footage of Lennon remained in the show's opening title sequence. Lennon only appeared in wide shots with the Lambert/Foster family or, in the case of Suzanne Somers' credit scene, fleetingly appearing at the bottom of camera view as the kids huddled around Somers. All traces of Lennon were edited out by the second season. In 1996, these two actors had the tables turned on each other; Castile served as the original voice of Eugene Horowitz on the Nickelodeon animated series Hey Arnold!, but after a few episodes was replaced by Lennon, who voiced Eugene for the remainder of the show's first season.

Going Places creators Robert Griffard and Howard Adler would end up employed with Step By Step as co-executive producers and members of its writing staff until the show's fifth season; Adler and Griffard later wrote an additional episode of the show as freelancers in the seventh season. Patrick Duffy directed several episodes, starting with the second season. The house shown in establishing shots for scenes set at the Lambert-Foster home is located at 2011 Fletcher Avenue in South Pasadena, California, although the series was actually filmed at Warner Bros. Studios in Burbank, California.

ABC chose to delay the series' sixth season to the 1996–97 mid-season (premiering in March 1997), in order to make room on that season's fall schedule for freshman sitcoms Sabrina the Teenage Witch and Clueless, which joined established series Family Matters and Boy Meets World on the TGIF lineup; the network canceled it after six seasons in May 1997, due to declining ratings. CBS concurrently reached a deal with Miller-Boyett Productions to acquire the rights to it and Family Matters from ABC, as that network attempted to build its own Friday night lineup of family-friendly situation comedies for the fall of 1997, called the "CBS Block Party".[3] The series' ratings, which had been declining for several seasons, continued to erode, and the show ended its run in June 1998. It ended without an official series finale, although the last episode centered on Frank and Carol considering selling the house. According to Staci Keanan and Christine Lakin, the series was supposed to end with Dana and Rich's wedding at the house, and elaborate preparations were underway for it prior to the series' abrupt end.[4]

The series' theme song "Second Time Around" was written and composed by Jesse Frederick and Bennett Salvay (both wrote the themes for other sitcoms produced by Miller-Boyett Productions such as Full House, Perfect Strangers, and Family Matters), and was performed by Frederick and Teresa James. The full 87-second version of it was only used during the first season. It was routinely edited over the following three seasons to allow additional time for scenes: the fourth verse was removed and the chorus was truncated in the second season edit, the kid chorus accompanying Jesse Frederick during the chorus' lyrics was removed in the version used during the third season, and the edit heard during most of the fourth season and the entire fifth season (which lasted for only 65 seconds) eliminated the electric guitar/drum/symphonic instrumental at the beginning.

The theme song and title sequence were dropped entirely for the sixth season, relegating the credits for the show's main cast and principal producers to appearing over each episode's cold open (which was preceded for the final two seasons by an abbreviated opening bumper featuring the family applauding as Lily blows out the candles on her birthday cake). The theme song was brought back for the seventh season, upon the show's move from ABC to CBS, although it was edited down to include only the chorus and the closing instrumental flourish (restoring the original longer symphonic instrumental heard in the original long version, and the edits used for the second and third seasons).

The amusement park seen in the opening credits is depicted as being located along the shores of Lake Michigan in Wisconsin (no amusement park like this actually exists in Port Washington). The one used is actually Six Flags Magic Mountain in Valencia, California, located miles inland from the Pacific Ocean. The body of water depicted in the opening and closing credit sequences (the latter being seen on in season one) located next to the roller coaster – which is digitally inserted into that particular excerpt – is placed over what in actuality is the parking lot of Six Flags Magic Mountain.

ABC Family was the first to acquire cable television rights to the series, and it became one of the cable channel's longest-running off-network syndicated programs in its history. Reruns began airing on there in 2001 (on what was then known as Fox Family), airing in various timeslots during its run ranging from late afternoon to the morning hours. On March 26, 2010, ABC Family's contract expired after less than nine years.[5]

The series returned to U.S. syndication on October 7, 2013, when the Hub Network began airing reruns;[6] the network dropped it on October 12, 2014, after the network became Discovery Family.

On October 1, 2021, Step by Step began streaming on HBO Max after its streaming rights expired from Hulu.[10]

Reviewing the pilot episode, Jean Rosenbluth of Variety wrote that, despite being an unoriginal clone of The Brady Bunch, it is a "modestly amusing, occasionally heartwarming show".[19]

Step by Step may refer to:

Topics referred to by the same term

For the record label, see Step One Records.

Step One is the debut album by British popgroupSteps. It was released in the UK and Europe on 14 September 1998. The album charted at number two on the UK Albums Chart upon its release, going on to spend 64 weeks in the chart. It was beaten to number one by This Is My Truth Tell Me Yours by Manic Street Preachers, who also beat Steps' single "One for Sorrow" to number one on the UK Singles Chart with the song "If You Tolerate This Your Children Will Be Next". In February 2000, the album was re-released in the US, containing songs from both Step One and its successor, Steptacular. The tracks "5,6,7,8", "Last Thing on My Mind", "One for Sorrow", "Heartbeat" and "Better Best Forgotten" were released as the singles in UK. In 2000, the album was certified 5× Platinum by the British Phonographic Industry, and has sold over 1.4 million copies in the UK.[4]

"Tragedy", which was recorded for a Bee Gees tribute album, was paired up with "Heartbeat" as a double A-side single and included on the group's second album, Steptacular, but is also featured as a bonus track on some international editions of this album.

The United States version included several tracks from Steptacular, and "Better the Devil You Know", while omitting most of the album-only tracks from the UK version of Step One. In this respect, it essentially serves as a Steps "best of" compilation for their UK releases through to "Deeper Shade of Blue". The U.S. Version also has the cover from the Steptacular album.

Notably, "Better Best Forgotten" was not included on this version, while the UK version of "One for Sorrow" was omitted to include Tony Moran's remixed track.

He is a tall, handsome, dark-haired, not swollen man of 32 years old. Being the vice-president of some prestigious companyhe leaves for work early in the morning and returns late in the evening. We have been married for four years.

Everything went to the point that it was worth trying to take possession of it, although the fruit is forbidden, since. It is not free. A lucky chance turned up only on the last night.

I deliberately lagged behind a little to look at her ass. So we got to the beach. There was a small pier. We took an umbrella and put our things.