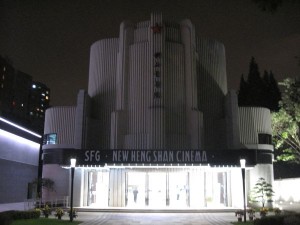 Fake art deco or Fako in Shanghai was discussed in a previous post and continues to rise. This post is about a very fine brand new example, the New Heng Shan Cinema. This movie theater never really got much attention, as the original building was a concrete stack probably from the 1950’s or 60’s (see picture right). As far as I know, there was no cinema there ealier as this part of the French Concession was pretty much the country side, and then an industrial area. The cinema was remodeled or rebuilt in 2010, giving a new fako monument to this part of Shanghai. 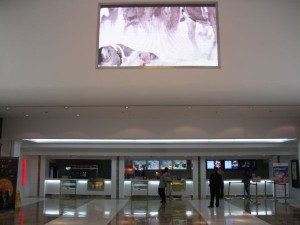 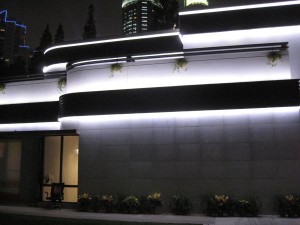 There is a clear inspiration from Art Deco theaters as seen in the USA or in Australia for this one. The building is also inspired by the Grand Theater on People Square (designed by Laszlo Hudec), the Majestic theater as well as the now destroyed Roxy and Metropol theaters on Nanjing Xi Lu.

The very geometrical shape with long line and curve really matches the period’s style with a modern twist. Even the hallway has art deco proportions and feeling, although there is very little decoration there. The side also uses a very geometrical shape and curves to guide the eye and visitors to the main building. It is particularly impressive at night when lighten. New technology in lighting has been perfectly used to create a combination of historical and modern feeling. Old art deco cinemas in Shanghai were very crafted pieces of architecture, including exquisite decorations in the inside, doors and hallways that are not always reproduced in today’s buildings including this one. Still the architecture of this one building transports us to a trip to Old Shanghai, while keeping touch with modernity.

Although fako buildings are not always great, New Hengshan cinema is a success, one great addition to this historic area. It is located 838 Hengshan lu, near Xu Jia Hui.

he Naço agency in Shanghai has carried out the renovation of the mythical Heng Shan cinema, the first "new China" cinema built in 1951. The renovation of this Art Deco cinematic liner was a question of completely rethinking the traffic surrounding the cinema as well as the appalling façade.

The façade is now adorned with vertical GFC lines (Glass Fiber Concrete) which have refined the building and reduced its monumental and heavy appearance, whilst a black concrete strip decoratively brings it all together and separates these lines from the ground.

The enclosed garden has been completely opened out and rethought to create a new welcoming open garden space in front of the cinema in order to connect naturally with the park situated right next to it. A renovation which is exemplary of the French agency’s international approach and its particular sensitivity for cinemas, from arthouse cinemas to Pathé multiplexes.

Just across from Xujiahui park, this one has more of an independent cinema vibe. Built back in 1951, it doesn't feel corporate (despite being owned by SFC) and it's not in a mall. The three rooms are small-ish but comfortable, and the third room has VIP seats for couples. No IMAX, but this one is a bit cheaper than the big cinemas; tickets are around 100-120rmb without using an app, and half that with one. It's easy to access because a taxi can drop you off right in front. Lots of dining and drinking options on this block too -- Pistolera is just next door for a pre-movie dinner and Park Tavern is there for post-movie drinks. On the negative side, they don't sell beer, but no one is gonna stop you from packing a couple tall boys in your coat or bag. Showtimes: Gewara.

Notable Places in the Area

Localities in the Area

The French Concession is the area of Shanghai that the French government administered from 1849 until 1946. Photo: 韩笃一, CC BY-SA 3.0.

Jing'an is a district in downtown Shanghai. It is named after the historic Jing'an Temple, and its transport hub is the Jing'an Temple metro station. Photo: Vmenkov, CC BY-SA 3.0.

A good traveller has no fixed plans and is not intent on arriving.  - Lǎozǐ

Escape to a Random Place 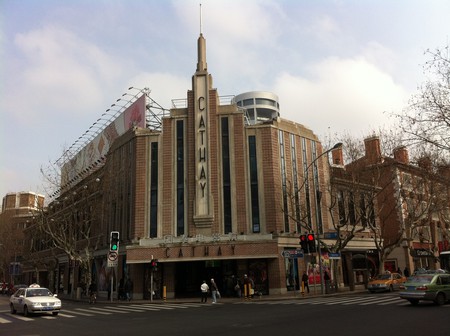 Shanghai has always loved the glamour of film, and the 1930s was considered the first golden period of Chinese cinema, with people from all walks of life flocking to theaters to watch them in gorgeous buildings around the city. In fact, a 1934 survey found Shanghai had 53 cinemas, more than any other city in Asia, and eighth in the world. Today, the city still loves its movies, and there are a huge number of modern complexes replete with 4D technology and Dolby surround sound playing some great flicks. However, these six cinemas harken back to a more glamorous time, when going to a movie was a special event to be savored.

Tucked into an unassuming neighborhood not far from the Bund, the Xinguang Cinema was once one of the most famous spots in the city. Opened in 1930 and originally called The Strand Theater, it hosted Charlie Chaplin in 1936, Beijing opera legend Mei Lanfang and was the first theater to screen China’s first-ever sound film, Sing-Song Red Peony. Eileen Chang (author of Lust, Caution) debuted her play Love in a Fallen City here in 1944, and some scenes of Ang Lee’s movie Lust, Caution were shot at the theater. Today, the exterior still sports its iconic checkered brick design and is a wonderful way to get a taste of old Shanghai. The 386-seat theater generally shows Chinese and foreign films and also hosts plays and other artistic works.

Tucked into a maze of traditional homes, this is one of the great László Hudec’s lesser-known works. Architecture buffs will notice its clean, curving lines and beautiful wrought iron railings that speak to its 1930 construction. Cinemaphiles will love that it has been screening films for more than 80 years, and the interior seems to have not changed much since viewers first started filling the 340 seats. The theater, which draws an audience mostly from the surrounding community, both breathes history and has a buzzing local vibe. The movies are also often cheaper than going to a modern theater, and they screen Hollywood films as well as Chinese ones. In 2012, the cinema faced demolition, but protests led by preservation activist Ruan Yisan saved this gorgeous building from the rubble heap.

Opened to grand fanfare on New Year’s Day 1932, this iconic edifice was the biggest cinema in Shanghai at the time, with seating capacity for more than 1,000 people. Designed by Czech architect C.H. Gonda (who was also responsible for the famous China Construction Bank on the Bund and the Capitol Theatre), the Cathay Theatre garnered a glamorous reputation for hosting movie premiers and playing host to legendary historical figures such as Victor Sassoon and Eileen Chang. Unfortunately, the grand theater was split into three separate cinemas, and much of the former interior glory has been covered over. However, the outside has stood the test of time, and you can still catch a flick inside to absorb some of the theater’s deep history. There are usually two Chinese films and one foreign film on offer.

When built in 1932, this theater was originally known as the Everbright Cinema and was a favorite spot of Lu Xun, the father of modern Chinese literature. Set in Hongkou district, where many great Chinese literati and theater people made their home, this cinema was one of Shanghai’s most technologically advanced theaters in the 1940s. During the reign of the Nationalist Army, the theater became the Central Propaganda Film Services Office, and then in June 1948, the Shanghai Literature and Art Department renamed it the International Theatre—until the cinema was given its current name in 2009. Today, the eight-screen cinema still features a pretty domed lobby and Art Deco stuccos, which stand out amongst the modern consumerist clutter.

This building is one of the greatest Art Deco treasures of Shanghai, and one of the city’s few historic cinemas where one can still get a taste of its former interior glory. The beautiful space was built by Hungarian-Slovak architect László Hudec, who was one of Shanghai’s main architects for three decades, and who designed many of the city’s other iconic buildings.

The Grand Cinema opened its doors on June 14, 1933, with the Hollywood movie Hell Below, and immediately become one of the most popular entertainment venues in town, screening movies produced by 20th Century Fox and Metro-Goldwyn-Mayer. It was also one of the first theaters to offer simultaneous translation services for the films that were in English.

In 2007, the Grand Cinema underwent a massive renovation to help restore the interior to its former beauty, which suffered during the Cultural Revolution era and the building frenzy during the ’90s. Today, curious passersby can wander up the terrace staircase and check out the mysterious “Hudec symbols” scattered around the floor, which are rumored to be pieces of the word Hudec. Movie buffs will find the original Screen One (which seats more than 1,500 people), along with five newer rooms that offer surround sound.

The Hengshan Cinema, which opened in 1951, was the first new movie theater built in Shanghai after the end of the Chinese civil war—when the Communists rose to power. However, the building you see today is not the same as it was before. When first built, the structure was short and squat—a pragmatic building that reflected the new Socialist aesthetic, crowned with a Communist red star at its apex. It was fondly known as “the garden cinema” for the extensive green space featured out front. In 2009, the Naço architecture firm was hired to redo the now dilapidated space, and they came up with the beautiful edifice that you see today, with clean, spare lines—but with that Communist star still at the apex. Inside are three different theaters featuring mostly Chinese films, with a foreign movie shown now and again.

We and our partners use cookies to better understand your needs, improve performance and provide you with personalised content and advertisements. To allow us to provide a better and more tailored experience please click "OK"

Opening her mouth, she gratefully took it into herself, caressing the still-withered male flower with her tongue, feeling the strange taste of the spicy mixture of. Her own and Sasha's juices. And then she lay, pressed against Sasha, and his wide palm gently stroked her shoulder. Both were silent. They were just fine.