World of Warcraft: Shadowlands players can find details on what Sanctum upgrades they should pursue first in this short guide.

After reaching Level 60, selecting a Covenant, and completing some short quests in World of Warcraft's Shadowlands expansion, players will be able to start upgrading their Sanctums. However, with a variety of Sanctum upgrade options available from the start, some fans may be unsure about what to dedicate their resources to first. Indeed, it is for these players that this guide is being written, and they will find some recommendations on a Sanctum upgrade order in World of Warcraftwithin.

Updated August 2, 2021 by Mina Smith: As Shadowlands players continue to play and explore, and as new updates come in for this newest WoW expansion, the order of things can definitely change. While many players might argue that the trinket makes the Fast Travel Network the first upgrade players should make, the Anima Conductor is probably the best upgrade to focus on first for most players. This depends a little on what is important as a player, but this article has been updated to reflect the importance of choosing the Anima Conductor first. With more changes coming soon to Shadowlands, players can expect this order may change.

The primary thing being considered here is what Sanctum upgrades in Shadowlands have the most potential impact on overall player power. As such, fans that consider things like cosmetics to be more important than the relative strength of their characters in WoW may disagree with the recommendations found below. However, this guide will attempt to acknowledge the benefits of each upgrade option so that every type of player can make a more informed decision.

RELATED: World of Warcraft: Shadowlands - How to Craft Legendary Armor

It is recommended that fans that are primarily focused on raising the power level of their characters upgrade the Anima Conductor first. Doing so will give players access to Anima Conductor events, which will eventually grant a special currency called Grateful Offerings as rewards. With 35 of these Grateful Offerings, players can purchase a Chronicle of Lost Memories from their Covenant's Renown vendor, and using this item will instantly give the character the Memory of an unknown Legendary Power in WoW.

While it will certainly take some time to start using Chronicles of Lost Memories, especially since they require that four Anima streams be permanently reinforced, this is perhaps the most impactful item, in terms of increasing player power, that can come out of the Sanctum upgrade system. Indeed, having an additional source for Legendary Powers is a great way to both play catchup and supplement Memory farming, and it is why the Anima Conductor is being recommended as a first upgrade.

Upgrading the Command Table in Shadowlands

From there, players may want to turn their attention to upgrading the Shadowlands Command Table, as it can also lead to rewards that improve a character. Soul Ash, for example, is a potential reward from Adventures, and that material plays a critical role in crafting Legendary Armor. That said, none of the rewards found on the Command Table are quite as powerful as the Chronicle of Lost Memories, making it a less important upgrade.

The Transportation Network in Shadowlands

That brings things to the Transport Network, which makes traveling across zones easier, and the Covenant Special Feature, which focuses on a mini-game that leads to cosmetic rewards. From the perspective being assumed for this guide, these can be considered lower-priority upgrades to be focused on last. However, if a WoW player feels that faster travel or a new Shadowlands mount will improve their experience greatly, then they should certainly not shy away from going with one of these upgrades first.

Each faction in Shadowlands has its own set of upgradables, so each of these are available no matter which faction a player has chosen:

World of Warcraft is available now for PC.

NEXT: World of Warcraft: Shadowlands - Best Covenant for Every Tank Spec

This Low-Budget Zombie Movie Has An Unexpected Twist

The Japanese zombie comedy 'One Cut of the Dead' ends up switching gears completely after its first forty minutes.

William Parks is an editor at Game Rant with a background in visual arts. Upon graduating from the University of Southern California’s School of Cinematic Arts, William entered the realm of fine arts administration, assisting curators, artists, and fine art professionals with the realization of contemporary art exhibitions. All the while, William’s passion for games remained. William’s first console was the NES, but when he was eight, it was The Legend of Zelda: Link’s Awakening on Game Boy that fully cemented his interest in the format. This interest reached a height with MMORPGs like Asheron’s Call 2, Star Wars Galaxies, and World of Warcraft, on which William spent considerable time up until college. Now, William enjoys playing Super Mario Maker 2 on the Switch with his daughter and finding time to sneak in the newest From Software game when possible. So too, an interest in Magic: The Gathering has persisted since William’s youth, and he can frequently be found watching Magic streams on Twitch and reading over the latest set spoilers.

Your Covenant Sanctum in Shadowlands will let you customize your zone, run missions, host parties, and even farm souls

The Shadowlands beta is starting next week, and it will give us our first look at the complete Covenant system, including the new Sanctums feature. Each faction has a Sanctum — similar to our Warlords Garrisons or Legion Class Halls — that you’ll upgrade as you progress through the game. Ion Hazzikostas described it as “a base of operations” for your Covenant, and you’ll be spending a lot of time there.

But Sanctums are more than a place to set your hearthstone and click on missions: they their own unique gameplay features that should make playing each Covenant feel different. Each Sanctum also has a feature that’s unique to the faction in question:

You can watch Ion describe these various systems on World of Warcraft’s YouTube channel, and you’ll get a chance to go hand’s on with them next week.

Blizzard Watch is made possible by people like you.
Please consider supporting our Patreon!

For eons the Jailer was bound within The Maw. Now, his endless armies gather as he expands its boundaries to consume Oribos. In the face of annihilation. Bolvar marshals his last remaining allies to charge into the heart of Torghast and confront the Jailer where he is most powerful. 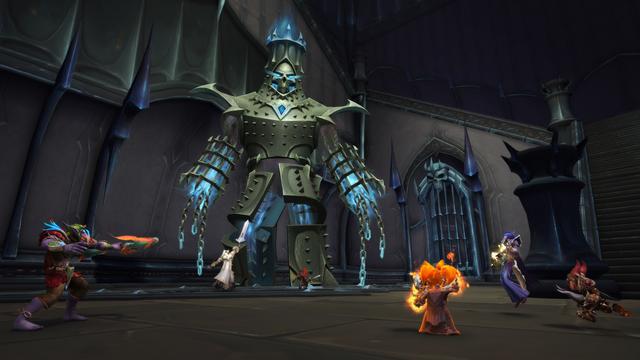 The raid is located in a new area of The Maw called Desmotaeron. The exact coordinates of the raid entrance are 70, 32, as depicted on the image below. 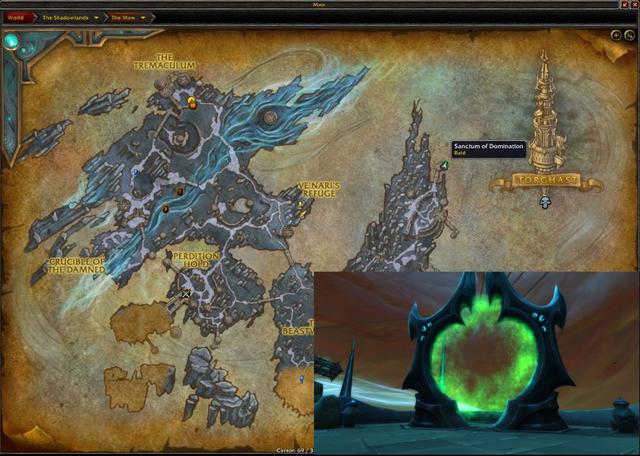 The following section will be updated in the future with strategy guides written by Ready Check Pull, the popular YouTube channel for boss strategies.

Note that the order is only according to the dungeon journal and does not represent a killing order. Boss order is outlined in the next section.

Below, you will find the links to our Encounter Journal pages for each boss of the raid.

The section will be updated with the correct boss order in the near future.

If you defeat Kel'Thuzad four times and collect four

The Shadowlands Weekly Chest requires you to defeat a certain number of Sanctum of Domination bosses to receive items in the Raids category. You can read more information about the Great Vault in our detailed guide.

In the following sections, you will learn all necessary information about loot that drops in Sanctum of Domination, the second raid of the Shadowlands expansion.

Here are the item levels of rewards from the Sanctum of Domination raid. The final 2 bosses drop better loot from the rest of the bosses.

Hunters will be able to acquire a Legendary bow and a a quiver from Sylvanas in Chains of Domination.

Many Conduits have a chance to drop in the raid, but you can acquire them from all Shadowlands sources as well.

You can find more information about Conduits in the guide below.

Completing all objectives of the

Glory of the Dominant Raider meta-achievement rewards the 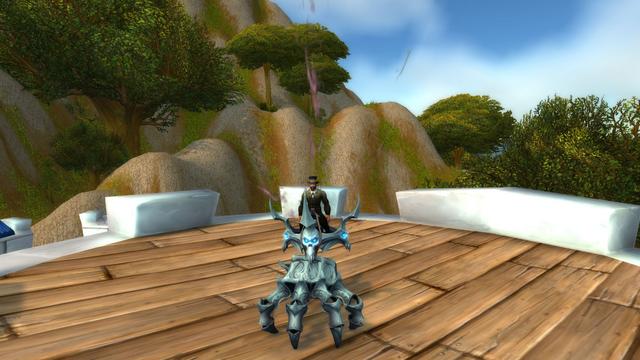 Hall of Fame: Sylvanas (Horde) — If you are among the first 100 Alliance/Horde guilds worldwide to defeat Sylvanas Windrunner on Mythic difficulty, you will be granted the Famed Bane of the Banshee Queen title.

Mythic: Sylvanas Windrunner — When you defeat Sylvanas on Mythic difficulty, you will receive the Breaker of Chains title.

Scribes will be able to create

Vantus Rune: Sanctum of Domination in Patch 9.1, which increases Versatility by 100 when fighting against a certain boss in the raid. The effect lasts for a whole week.

For each class, we provide boss-by-boss advice, complete with actual tips, but also recommendations for talents and Legendary Powers.

The Sanctum of Domination is a raid in World of Warcraft: Shadowlands, introduced in patch 9.1.0. It is located in The Maw, beyond the labyrinthine halls of Torghast. It is the home base of the Jailer.[1]

The raid consists of 10 bosses. Encounters include the true Eye of the Jailer, the Tarragrue, Kel'Thuzad, and Sylvanas Windrunner.[2]

The instance line and meeting stone are located at [70, 32] 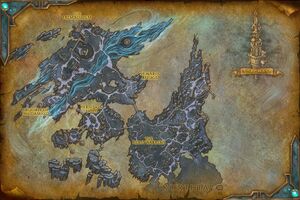 in the back of Helgarde Keep of Desmotaeron in the Maw.

For eons the Jailer was bound within The Maw.[sic] Now, his endless armies gather as he expands its boundaries to consume Oribos. In the face of annihilation, Bolvar marshals his last remaining allies to charge into the heart of Torghast and confront the Jailer where he is most powerful.

The Jailer's vanguard stands ready to repel any attack. Their lines must be broken to breach the Jailer's sanctum.

Screams of the tormented fuel the Jailer's army. End their suffering and deprive the Maw of its most precious resource.

The soul river ends at the tower's peak. Destroy those feeding off it to free the countless souls deprived of their afterlife.

Atop the Tower, Sylvanas Windrunner awaits. Here, the final confrontation for the fate of the cosmos will take place.

Items in the raid drop at two item levels per difficulty: the first eight bosses drop at one item level, and the last two (Kel'Thuzad and Sylvanas Windrunner) drop at a higher item level.

Beyond the normal item drops, there are a handful of unique items or item effects that are found in the raid.

Thanks, I slept well. Tanya looked at me and smiled. I did not take my eyes off her, my eyes followed her every movement and gestures, examined her body, face, hair, hands.

Temperamental. And the daughter is all in you. The woman was very nervous, although she did her best to keep calm.