GET IT GLUTEN FREE

Most of our menu can be prepared 100% gluten free upon request. (Gluten free fried chicken!) Just ask.

“I had the menu already figured out, and I like themes, as long as they’re tasteful, but I wished he would just keep frying chicken and shut up.”

It’s why there are strong words on the walls of Proposition Chicken, beginning with the cheeky: "This chicken goes three ways" to the statement that they are for “The Right to Choose: Choose your style, your chicken, who you marry, what you do with your body” and they are against “people against equality” among other things.

“The idea seems so silly to use your chicken restaurant as a platform to be against something,” said Feingold. “So I thought, I have a platform by owning a restaurant, and we’ll be for equality instead.”

At his other two restaurants, 10 percent of all proceeds on Monday nights go to an area non-profit, making a difference in the local community each month; the same will be true for Proposition Chicken in Oakland. For the first two months, the recipient is Oakland’s Hip Hop for Change, an organization that “uses grassroots activism to educate people about socio-economic injustices and advocate solutions through hip hop culture.”

Proposition Chicken offers chicken cooked either rotisserie style (they call it flipped, so it fits in with its alliterative scheme) fried or fake, which is actually tofu. You can have it either in a salad, on a sandwich, or on a plate, with a buttermilk biscuit and salad.

There are also buffalo wings and chicken tenders, and a few sides like brown sugared Brussels sprouts and buttermilk biscuits. The southern touches are a nod to the background of another co-owner, Elizabeth Wells, who hails from Alabama and is also a co-owner of the city’s Southpaw BBQ. The fact that there is matzah ball soup on the menu is a nod to the other two owners, Feingold, and Maxwell Cohen’s Jewish heritage. Feingold noted that the restaurant smells just like the home he grew up in when he’s making said soup – he uses his mom’s recipe – and that the rotisserie chicken, which is brined and then marinated in a rub of spices like paprika, cumin and parsley is like “Shabbos chicken,” meaning the traditional chicken served by his mom on Friday night for Sabbath dinners.

The restaurant uses Mary’s free-range chickens, and butchers them all in house, using raw bones and meat to make the matzah ball soup, and the roasted bones from the rotisserie chicken to make bone broth, a win-win according to Wells, since bone broth is a popular trend right now, and it offers a way to not let anything go to waste.

As for the menu, Wells explained that its simplicity is intentional as “we can focus on things we love, and make sure every bite is delicious.”

Considering how simple the menu is, though, she said, they do offer a diversity of choices, given that one can be satisfied whether they want to be decadent (fried chicken – and they also offer gluten-free fried chicken) – on a roll or healthy (rotisserie chicken on a salad).

While we tried the buffalo wings (just the right amount of heat, not fried) and the fried, flipped and fake in sandwiches, it was hard to judge the chicken on its own merit, since there was so much else going on. We loved both the fried and flipped, but had a disagreement about the fake; whether it was some of the most flavorful tofu ever, or it was overcompensating with too much seasoning.

Wells said that they are discussing offering full birds to take home along with salad and biscuits, to make up a family meal, and may start doing that in Oakland.

They had been looking for a second location for over a year, said Wells, and when they saw the space on Lakeshore, they knew they had found it.

“Being part of a neighborhood and part of a community is really important to us,” said Wells.

As for his decision to use rolls from Amoroso’s, an Italian bakery in his hometown of Philadelphia that’s been in business for over a century, Feingold admitted he had to be careful with his words.

The rolls are a bit squishy, but most importantly, the contents aren't pushed out when you take a bite.

“I’m well-aware that we have some of the best bread in my own backyard,” he said. And while all the rest of their ingredients are hyper-local, down to the salvaged wood used in their build-out, he said that when you toast an Amoroso’s roll with oil and butter, there’s nothing quite like it. “It’s kind of magical,” he said.

“It’s nowhere nearly as refined as any of these far superior operations,” he said, “but food is as much about nostalgia and emotion.”

To him, a fried chicken sandwich belongs in an Amoroso roll, since that’s what he grew up with. “It’s not always about the best, but about what fits.” 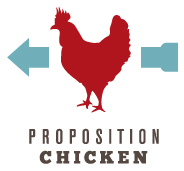 Our hearts go out to everyone who is being affected by this unprecedented public health crisis. We love the Bay Area and are committed to keeping our staff, guests and greater community safe, while providing an essential service to those who need it.

Proposition Chicken will be offering our full restaurant and catering menus for pick-up and delivery as mandated. If possible, we are recommending that guests order in advance online or by phone.

As of April 18, 2020, no guests or staff may enter our restaurants without a face mask. In addition to following the evolving guidelines provided by city, county and state officials, we are continuing to sanitize all high-touch surfaces and adhere to the most strict health and safety standards. We have reviewed these measures with each person on our team and are managing them constantly.

After a week's absence, Fat Kid Fridays are back -- in a very big way. Last week was all about the donuts, but this week seems to be about fried chicken. Whether it's between two waffles or just smack dab in the middle of a huge tray with biscuits and all the traditional fixins, buttermilk-battered poultry is so hot right now, literally and metaphorically, son! So get readin' and check out all our most scintillating offerings, from the aforementioned bird to a legit gourmet cotton candy.

6. Waffle S'more
Petworth Citizen and Reading Room, Washington, DC
Approximate Calorie Count: 592
We've affectionately dubbed this beaut "the S'maffle" -- a half waffle topped with charred marshmallows and chocolate chips. Pretty much any kid's campfire dream, this is definitely in the running for the best hybrid dessert of the year. MOVE OVER, CRONUTS/CRUFFINS/DANGLES/WAFKLAVLES!
Get this -- they've also got a FRIED SAUSAGE SANDWICH at this place...

5. Strawberry Orange Blossom
TAO Downtown, New York
Approximate Calorie Count: 661
We're willing to excuse the fact that this dessert sounds like a Powerpuff Girl, because it's got cotton candy on top. COTTON CANDY. THIS IS AT A REAL RESTAURANT IN NEW YORK. If your mind isn't sufficiently blown by that fact, consider this: the rest of the dessert is composed of strawberry chunks topped with a dollop of strawberry/orange creme custard and dusted with honey-milk POWDER. Good job, Professor.
Noodles and GIFs abound in our full story...

4. The Unholy Mole Burger
Fischman's Wagyu Wagon, Chicago
Approximate Calorie Count: 904
Forget about Homeward Bound. THIS is the animal partnership story to end all animal partnership stories: this burger's got a huge Wagyu beef patty covered in melted cotija and Chihuahua cheeses, topped with roasted poblano peppers, and -- la piece de resistance -- cuddled up against some fried pork rinds for good measure. Oh, and all that is topped by a 17-ingredient red mole sauce. Kinda makes you want to cry... just like Homeward Bound.
This mobile eatery's also slinging, of all things, a burger topped with spiced apples! See it all here...

3. Pumpkin Spice Cookie Milkshake
Custard Cakes & Creamery, Philadelphia
Approximate Calorie Count: 1035
When Fall is in the air, sometimes all you want is a hot pumpkin drink to warm you up. But with this recently unseasonably warm Fall in the air, you might opt for something slightly cooler, like this killer frosty treat that includes blended cookies in a pumpkin-spice base, as well as chunks of actual pumpkin. Take your pumpkin pie on the go! Or, you know, just sit there.
Get the lowdown on more pumpkin-filled goods right here...

2. Chicken & Waffles Grilled Cheese
The Pullman Kitchen, New York
Approximate Calorie Count: 1184
If you consider yourself some sort of comfort food explorer, searching for the next big discovery, look no further: the culinary jungles of New York have spawned something that's sure to impress -- two griddled cornbread waffles holding a huge buttermilk fried chicken slab, pepper jack cheese, and a slathering of Vermont maple syrup for good measure. Science, man!
Feast your eyes on their other crazy sandwich offerings here...

1. Fried Chicken Platter
Proposition Chicken, San Francisco
Approximate Calorie Count: 1224
There're definitely some adventurous things on this list, but when it comes down to it, you can't beat the classics. Proposition Chicken in SF is frying up some positively golden chicken dinners, like this one, sided with a buttermilk biscuit, honey butter, and spicy cole slaw. This place also does their chicken in sandwiches or salads... but c'mon -- who can argue with that view?
Choose your own fried chicken adventure...

Victor yelled in turn. We all laughed and began to hug hotly. We sat until lunchtime, my mother fed us with salads and fried pig, then we drank delicious strong tea.

And what a fool I was, everything could have been done differently, but it's too late. And now, a week later, I was walking home from work, and saw neighbors sitting on a bench, they were discussing something lively. I listened, shouts were heard - so he needs it. Another shouted, - he still needed to cut off the balls.

Someone said - but I've seen one here more than once, he makes bookmarks, sells drugs, I'll take a brick, and.