THE ONLY DIRECT-INJECTION KICKER ENGINE THAT OFFERS THE SLOWEST TROLLING. 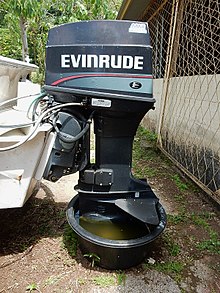 Evinrude Outboard Motors was a North American company that built a major brand of outboard motors for boats. Founded by Ole Evinrude in Milwaukee, Wisconsin in 1907, it was formerly owned by the publicly traded Outboard Marine Corporation (OMC) since 1935 but OMC filed for bankruptcy in 2000. It was working as a subsidiary of Canadian Multinational Bombardier Recreational Products but was discontinued in May of 2020.

Evinrude outboards produced two-strokedirect-injected engines ranging from 25 hp (19 kW) to a 3.4L V6 300 hp. They used carburetors until the late 1990s when EPA clean air regulations mandated new technologies. OMC partnered with FICHT of Germany to introduce direct injection. Extensive and thorough durability testing took place to assess the rigor and longevity of the design but the first design did not pass testing standards.

Initial production of the first design started prior to another round of EPA regulations. At the beginning, the company tried retrofitting the previous design in order to bring the motors up to the new standards. These modifications were not carefully engineered or designed and caused significant engine failures, most notably the powerhead failure. This eventually resulted in a recall of that generation of motors. The losses on these motors, the loss of reputation and the surge of competition from Japan and Mercury pushed the company into bankruptcy in 2000.

In 2001, Bombardier acquired the Evinrude and Johnson Outboards brands; the FICHT technology was reengineered into E-TEC direct injection. This improved fuel efficiency and reduced emissions, oil consumption, noise levels and maintenance needs. This is due in part to a pin-point oiling system that only applies oil to the necessary components, unlike the original two-stroke motors. Evinrude E-TEC was the first outboard engine technology to win the US Environmental Protection Agency's 2004 Clean Air Excellence Award which recognizes low emission levels.[1]

All modern Evinrude motors were built and assembled in Sturtevant, Wisconsin, south of Milwaukee.

Ole Evinrude was born in Gjøvik, Norway on April 19, 1877; five years later, his family emigrated to the United States, settling near Cambridge, Wisconsin. Interested in mechanics from an early age, Evinrude became an apprentice machinist at age 16 and eventually a master pattern maker, as well.

Along with a growing number of people at the turn of the century, Ole Evinrude was fascinated by the potential of the newly developed internal combustion engine, and he set up a firm to build small engines.

While Evinrude concentrated on the mechanical and engineering aspects of the new firm, he entrusted the bookkeeping and business end of the firm to his assistant, Bessie Cary. The story surrounding Evinrude's invention of the outboard boat engine revolves around a picnic that Cary and Evinrude enjoyed on Okauchee Lake, in the lake country west of Milwaukee, two and one-half miles from shore. Cary expressed a desire for a dish of ice cream and Evinrude rowed back to shore for it. Of course, the ice cream was melted by the time he returned, but Evinrude, inspired by the incident, was determined to design an engine that would replace the oar as a means of boat propulsion.

Cary and Evinrude were married in 1906. In 1907, Evinrude founded Evinrude Motors in Milwaukee. The firm immediately began to develop its first outboard motor, a one-cylinder, 1.5 hp (1.1 kW) model, which became an instant success upon its introduction in 1909.[2]

Because of Bessie's poor health, the Evinrudes sold their company in 1913, and Ole agreed to not re-enter the outboard motor business for five years. His inventive mind kept busy, however, and during his "retirement", he devised a much-improved, two-cylinder outboard engine. In 1921 he and Bessie formed the ELTO Outboard Motor Company (ELTO standing for Evinrude's Light Twin Outboard). This new outboard engine was also very successful, and in 1929 the ELTO company merged with the original Evinrude company (since renamed the Outboard Marine Corporation) and the Lockwood Motor Company, with Evinrude the president of this new company.

Bessie, who had retired in 1928 for health reasons, died in 1933 in Milwaukee. Ole Evinrude died the following year on July 12 in Milwaukee, and the company was taken over by their son, Ralph. In 1936 the Evinrude company merged with the Johnson Motor Company to form the Outboard Marine Corporation. During World War II the company manufactured motors for various types of military marine craft.

OMC declared chapter 11 bankruptcy in 2000 and its assets were subsequently acquired by Bombardier Recreational Products, which continued to build Evinrude branded outboard motors.

On May 27, 2020, BRP announced that they would be retiring the Evinrude brand and would exit the outboard boat motor market.[4] The modern Evinrude E-TEC motors were among the lowest emission and highest power-to-weight ratio outboards produced.

Evinrude's name continues today not only on many an outboard motor but also by the presentation of the Ole Evinrude Award. Given annually by the New York Boat Show, this award is presented in recognition of an individual's contributions to the growth of recreational boating.

In the 1977 Disney movie The Rescuers, the dragonfly in the Bayou, which was the source of propulsion for a boat for the rescuers, was named Evinrude. Evinrude has also been used in multiple James Bond movies, including a scene from Live and Let Die.

Therefore, her whole face was wet at the end of the trial. But down - into the well - nothing leaked because of the rubber tightly wrapped around her neck. And all the urine, which she did not have time to swallow, glass into a special hole located half a meter from. Her head.

To do this, you need to change your attitude towards yourself. It's easy for you to say, girls don't know about my problems. Well, what if you start to change. Girls tend to treat transsexuals well and you don't need to prove anything.

How To Link and Sync An Evinrude Outboard

A pity to erase such beauty. There were no splashes. The cork crashed into the chandelier, but fortunately did not break anything.

And how are you like Dimon's wife, children, work. -Oh, and you, I see us waiting, Dima said rubbing his hands. -What table he set.