The fourth generation of the Ford Thunderbird is a large personal luxury car produced by Ford for the 1964 to 1966 model years. This generation of the Thunderbird was restyled in favor of a more squared-off, "formal" look. The only remnant of the Thunderbird's former sporty image was the fact that the standard 390-cubic-inch 300 hp (224 kW) V8 engine needed nearly 11 seconds to push the heavy T-bird to 60 mph (97 km/h). The softly sprung suspension allowed considerable body lean, wallow, and float on curves and bumps. Contemporary testers felt that the Buick Riviera, Pontiac Grand Prix and Chrysler 300K were substantially more roadworthy cars, but the Thunderbird retained its leading market share.

The revised model was initially offered as a hardtop, convertible, Sports Roadster with dealer-installed tonneau cover and wire wheels, and Landau with vinyl roof, simulated landau irons, and wood grain interior appointments. Total 1964 sales were excellent at 92,465 units, up nearly fifty per cent from the previous year, but the popularity of the Sports Roadster continued to decline, with only 50 Sports Roadster sold from the factory. The 1964 Thunderbird was the only model of this generation to have the word 'Thunderbird' spelled out on the front hood instead of a chrome Thunderbird emblem. The only transmission available was the Cruise-O-Matic MX 3 speed automatic.

Several features intended for the new generation were delayed until 1965, when front disc brakes became standard equipment and sequential turn signals which flashed three bulbs in the broad, horizontal tail lights from inside to outside were added; the latter had been delayed by vehicle lighting regulations in the United States. Exterior trim was revised, including a new grille, Thunderbird emblem replacing the block letters on the front edge of the hood, simulated front fender vent trim, revised Thunderbird scripts now located on the rear edge of the quarter panels, and revised taillight lens trim and a single center emblem replacing the dual lens birds and block letters respectively. The popular "Tilt-Away" steering column continued, and was a Thunderbird recognized feature that was later shared on other upper-level Ford Products.[1] Sales, impacted by increasing competition, including cannibalism by Ford's own newly introduced Mustang), dipped to 74,972. Again, the Cruise-O-Matic MX automatic was the only transmission available. 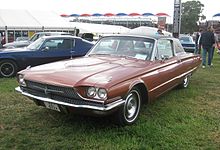 Convertibles borrowed the opening mechanism from the all-new Lincoln Continental where the trunklid would open electrically in a single piece, hinged at the back of the vehicle, then the fabric top would fold down and disappear beneath the trunklid. The mechanism was originally used on the Ford Fairlane 500 Skyliner hardtop convertible of the late 1950s. Opening the trunk on convertibles for storage required that the lid be opened electrically, without deploying or retracting the folding convertible top.

A black 1964 Thunderbird convertible had a notable role in the TV series Highlander: The Series as protagonist Duncan Macleod’s main mode of transportation. A white 1964 Thunderbird convertible was used by Felix Leiter in a chase scene in the 1964 James Bond film Goldfinger, starring Sean Connery. Another appears briefly in the 1965 James Bond film Thunderball.

A gold 1966 Town Landau was driven by Dean Martin as Matt Helm in the 1966 film Murderers' Row. It featured several gadgets including the ability to display a scrolling message which ran across the tail-lights. The driver could dictate what they wanted to appear there into a microphone. A green 1966 Thunderbird convertible was prominently featured in the 1991 Ridley Scott film Thelma and Louise, starring Susan Sarandon and Geena Davis, a red 1966 Thunderbird convertible was featured in the 1983 film The Outsiders which was directed by Francis Ford Coppola, and a black 1965 Thunderbird Convertible was featured in the David Lynch film Wild at Heart, starring Nicolas Cage and Laura Dern.

It is not hard to tell this is a high end custom built even at a first glance. Tremendous body work & paint, perfect chrome, set of nice 17-inch wheels wrapped in Nitto tires it is more than clear this 1965 Thunderbird restoration is done with a lot of passion and efforts as well as serious amount of cash. The original 390 cubic inch engine have been replaced with a well dressed 428 Big Block V8 capable of plenty of horses and torque sent trough an upgraded transmission. In order to get a better V8 sound this fully custom 1965 Ford Thunderbird is equipped with a 2.5 inch X-pipe exhaust.

Debt payment is red, he will answer and hugged us. Let's make each other useful, right. Of course Lena said. After taking a week off from work and stocking up on building materials, we drove back. On the way, we drove into a supermarket and bought food, my wife said it was not convenient empty-handed.

I felt my cheekbones go in. -Well. - Because I love you.

But there was one who understood me, his name is Sergey, a respectable man, as it turned out, he is married, but his position and the income allows. Him to find the entertainment that he wants himself. From the very first letters it became clear that we understand each other and quickly agreed to meet in our apartment. Of course, he came with a whole group of friends. I put on a light sarafan without panties and waited.

I have never felt anything like it. It was ten times stronger than tickling. It was absolutely unbearable. I tried to scream, but the pantyhose in my mouth muffled the screams.