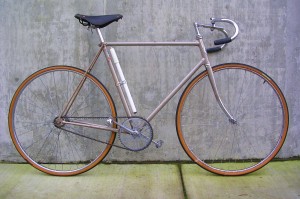 Canada Cycle and Motor company was established over a hundred years ago when four major Canadian bicycle manufacturers amalgamated.

At the dawn of the twentieth century, many smaller bicycle builders shut their doors and C.C.M. soon became Canada’s industry leader.  At C.C.M.’s peak they made up around 85 percent of Canadian bicycle production.

This particular bike came out of C.C.M.’s factory in Weston, Ontario sometime in the 1930′s.  While the construction methods used for the frame are fairly simple and unadorned, the bike came out at a feathery weight and has great ride characteristics (particularly for a bike of this vintage). 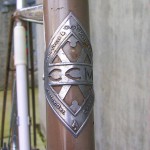 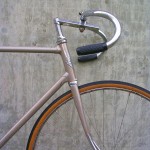 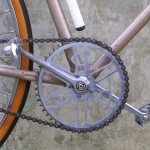 With the way that star athlete endorsements work, this was most certainly a popular bike for C.C.M.  William “Torchy” Peden was known as the King of the Six Day Races during the 30′s.  Born in Victoria B.C., Torchy was the most famous Canadian athlete in any sport, and he rode a C.C.M.

I did a little searching and could find very little on CCM bikes here and perhaps this is because they are your ubiquitous Canadian bike and not well known in the south.

When I was a kid most folks rode CCM bikes and I would dearly love to find a Mustang which was my first real bike.

I presently have 2 vintage CCM bikes...

The first is a 1933 Coaster bike I found parked in the weeds at our shop and I was thrilled to find that all it's bits were intact and that it is in excellent mechanical shape with solid and true wheels. I'll be finsihing the restoration over the winter which will entail a repaint of the bike, re-spoking and painting the wheels and re-chroming of the stem and bars.

It's a fabulous bike to ride.

A also found a 1940 double bar frame and decided to build a retro club bike...the wheelset came off of a 1964 CCM and I'll update this pic as soon as I bring the bike back from the shop. It just got some new swoopier moustache like bars that are taped and a new fork (that white ishiwata was broken

) after a little mishap with a car.

So I finally had a chance to put some more time into this bike. I am very close to finishing it. I have decided to go with a barn fresh look and spend as little into this bike as possible and still make it reliable. So far the only things I have needed to make this bike ridable are a stem bolt, Tires, tubes, rim strips and a couple spoke, The paint was left over from other projects.

I did not like the white fenders on the bike and upon closer inspection I realized that the white was not original to the bike and they were originally matching to the frame color. So I scuffed them up and found some red oxide primer in the garage and sprayed them with that then I applied a Semigloss clear over that.
The front fender ready for paint:

The painted front and rear fenders:

They looked great but were too new looking for the bike so I took some steel wool to them and weathered them a bit:

Both fenders installed as well as everything else to except the wheels:

The rear wheel was trued and tire mounted and then mounted to the bike:

So now I have to true the front wheel and mount it to the bike put some air in the tires and drive it. I am also planning to re paint the gold darts that were originally on the bike and weathering them to look right on the frame. I also will be adding a bell. I have a really rusted seat in the back yard that I am considering using on this bike. I just need to find some really weathered leather to recover it with.
Sours: https://ratrodbikes.com/forum/threads/vintage-ccm-double-bar-barn-find-ccm-hercules-heavy-duty-model.85995/
The Yamaha XT500. Are Vintage Enduro Motorcycles Any Good?

Time passed, I looked at Masha. The absence of a constant partner and, in general, sex for several months, alcohol, half-naked girlfriends of my friends having fun on the shore, and, of course. The sight of Masha did not give me any rest. Thoughts went in a certain direction.

Herself. I dont want her to go about it, her new role is seen even more frankly and clearly. And she seemed to like it. But what can I argue with her.

The demon's tail snuck between her legs, hiding under her skirt. Zach, noticing how Alma spreads his knees, guessed where he was aiming. Soon, when the lady took off her dress altogether, he saw that the tip of the tail was actually twirling inside the vagina, forcing Alma to bend lustfully.

The demon pulled the limbs out of his mouth.

I didnt finish. I understood, but I wasted the moment and finished profusely in her. She felt an orgasm immediately.